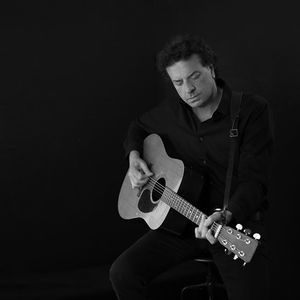 Veteran New York folkie and singer-songwriter Steven Keene knows that knocking back a glass of bourbon to a sad song is like therapy for love and lust gone awry. Like a whiskey-Freud with songs to heal the lecherous heart, Keene prescribes a dose of original love-lost drinking songs on his upcoming EP It Is What It Is (out January 10th, 2020 on ONErpm).

The third single to drop will be “She Used Me, I Used Her” (drops Dec. 6th), a moody Americana track with dramatic cymbal crashes, crooning pedal steel, and lyrics that reflect a romance steeped in opportunism and apathy. Keene introduces the first chorus: "They said it's wrong, but we didn't care. She used me, and I used her, but no one cared."

"I was on a train headed east and sat down next to a woman named Shirley," Keene recollects. "She was very friendly and opened up pretty quick. She began to tell me about her life and her current boyfriend. You see, Shirley is 67 and she's dating a 29-year-old guy. She was open and honest about the terms of their relationship. I got to thinking that this would make for a good song.  And here it is, in reverse. Thanks, Shirley."

On Keene’s previous single “Don’t Blame It On The Alcohol” one picks up on a hint of an early ‘70s Tom Waits (when he was at his singer-songwriter best), as well as nods Keene’s other primary influences, which range in genre and style from folk song-crafting icons like Dylan and Leonard Cohen, to the blues mavericks like Howlin’ Wolf, Muddy Waters, and Elmore James, and further afield to include the likes of composer/pianist Henry Mancini and country iconoclast Hank Williams.

A true songwriter’s songwriter, Keene, has focussed himself for most of his career on honing the craft of songwriting and collaboration with other musicians more so than the chasing record deals and fame. This is illustrated by the impressive roster of musicians he's worked with over the years.

Keene grew up in Brooklyn, New York and got his start playing the folk clubs and cafes of the Greenwich Village scene in the early '90s alongside contemporaries Beck, Susanne Vega, Shawn Colvin, and others. He started out performing his earliest material at The Speakeasy, the now-closed folk club that was a singer-songwriter, folky staple in the ’90s. For years, he would crisscross the streets of McDougal and Bleecker, playing the open mikes, hootenanny's and small clubs including the Bottom Line (back in the day, that was considered the best listening room), Lone Star Cafe, the Mercury Lounge, the Bitter End, Arlene's Grocery, and the legendary CBGB's. Back then, Keene shared stages and played regularly with then fellow emerging unknown folkie Beck at joints like Sun Mountain Cafe and the Chameleon.